Find out the secret magic trick that will make you win, in a mysterious and arcane adventure at the Wizard of Odds online slot. As the name suggests, it is a wizardry-themed game that has icons like spell books, magic hats and cauldrons. Introduced and released by Mazooma Interactive Games (MIG) of the Novomatic Group, Wizard of Odds slot is like other wizard-themed games but has its unique features, bonus games and a progressive jackpot. The graphics and sounds of the game are really good. Let’s see the game characteristics in some more details. 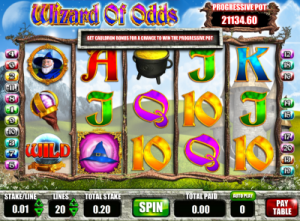 The game is played against a backdrop of snow capped mountains and rolling hills. It has five reels with three rows and twenty pay-lines. The wizard, the wizard’s staff and the game’s logo are the three high value symbols of the game. Other symbols of the game are 10, J, Q, K and A. The game has the crystal ball as the Wild symbol and three bonus symbols that include the spell book, the wizard’s hat and the cauldron, each having their separate features

The bonus features of the Wizard of Odds slot is what makes it different from other similar themed slot games. The game has several bonus features, which are described here:

Wizard’s Hat Free Spins: The hat bonus is triggered if you are able to get three hats. You need to select one hat through which you can determine the number of spins. Then you have to select the multiplier. The hat is a fairly low rate bonus with limited winnings. 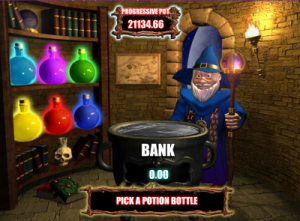 Cauldron Bonus: You can trigger this bonus by getting the cauldron symbol on the first, third and fifth reel. When you get three cauldrons, the wizard appears. He has six coloured potion bottles. You can select any of these bottles to get the cash prize as the wizard pours the potion into the cauldron. More cash benefits can be obtained by repeating the task several times.

Spell Book Bonus: This bonus is triggered when you get a book in the middle line. Your prize money increases as the pages of the book open. Though the prize money is random in this bonus, it is a nice bonus if it appears several times during the game play.

Aleister Crowley, the famous English occultist, once said: “Indubitably, magic is one of the subtlest and most difficult of the sciences and arts. There is more opportunity for errors of comprehension, judgement and practice than in any other branch of physics.” Luckily enough you have not to be a professional magician, neither a physicist, to play and enjoy the Wizard of Odds online video slot. As slots with several bonus features are liked, Wizard of Odds comes up to be a good and favourite slot. Although the RTP at the game is fairly low at 92.9% there are plenty of wins that keep you tied to the game. The game play is smooth and the user interface is fairly simple. Besides other bonus features, the progressive jackpot makes it worth playing. Those of you who want to try their hand at the slot can take a demo play at the various casinos where it is offered.

Here you can find another slot demo game with the same title and developed by SkillOnNet. This version seems a bit more dark and sinister, and also rules and symbols are a bit different, but it is certainly equally enjoyable.

Wizard of Odds by SkillOnNet Demo – Click to play!